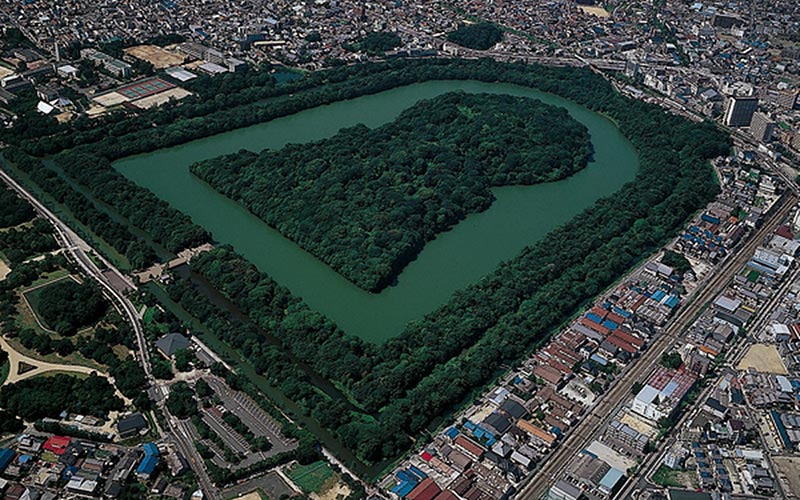 This is Japan’s largest keyhole-shaped tomb, measuring 307m in width and 33.9m in height on its front square and 486m in length, 249m in diameter, and 35.8m in height at the rounded rear. The Engishiki (compiled 927) named the tomb Mozu-no-mimihara-no-naka-no-misasagi; at present, it is under the care of the Imperial Household Agency, which has determined it to be the tomb of Emperor Nintoku, the 16th emperor of Japan. The tomb is three-tiered with platforms for religious ceremonies on either side of its narrowest part and is encircled by three moats, of which the current outermost moat was re-dug in the Meiji Era. In 1872, a chest-shaped stone coffin in a vertical-style stone chamber was excavated from the front mound along with swords, armor, glass pots and dishes. The Museum of Fine Arts in Boston, United States, contains the Saisenshiki-jutaikyo mirror and the Tanho-kantotachi sword, said to be excavated from this tomb; additionally, there are over 10 small tombs called “baicho” that have been discovered in the surrounding area. The tomb is encircled by a sightseeing walkway approximately 2.8 km long, which takes an hour to walk around.