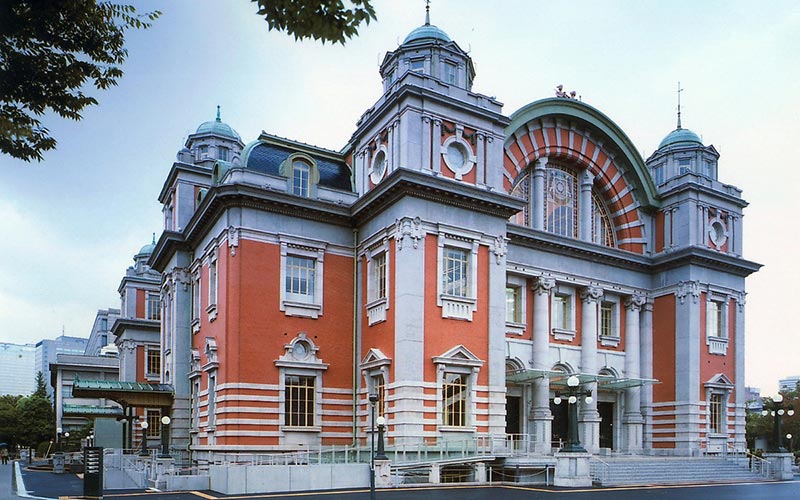 Osaka City Central Public Hall is an attractive, red brick building in Nakanoshima in Osaka, surrounded by greenery and water. It features old-fashioned architecture, and is used for cultural, artistic, and social activity purposes. Alongside Osaka Castle's main keep, this building symbolizes the city of Osaka. The building is of a steel frame and brick construction, and has three stories above ground and a basement level. While the basic style of the building is Neo-Renaissance, it incorporates elements of baroque grandeur, and the Viennese Secession style has been incorporated into its detail work. The building is characterized by its arched roof as well as a special-use room with a wall-to-ceiling painting of the beginning of the universe, done by the Western-style painter Hisashi Matsuoka. Construction was completed in 1918, and the construction cost of ¥1 million (¥5 billion in today's money) was covered by a donation from Einosuke Iwamoto, a stockbroker of the time. The designers were Shinichiro Okada and Kingo Tatsuno, who were leading figures in the architectural world of the Meiji period. Restoration was completed in 2002: for the first time in the 80 years since its construction, the building was restored to its original appearance. This large assembly hall, which has been visited by notable figures such as the social activist Helen Keller and Soviet cosmonaut Yuri Gagarin, is currently used as a lecture and concert hall. Additionally, in the NAKANOSHIMA SOCIAL EAT AWAKE on the basement level, visitors can take time to enjoy creative Western-style cuisine in an atmosphere that blends together the classic and the modern.